The First Balkan War started shortly after the Balkan League was formed. The Balkan League was made up of Serbia, Bulgaria, Greece, and Montenegro. Russia was responsible for forming the League; this was because Russia wanted to take Macedonia away from Turkey while Turkey was involved in another war. On October 8th, 1912 Montenegro declared war against Turkey. Within ten days the rest of the Balkan League had also declared war on Turkey. The League had many early victories, such as Bulgaria defeating the main Turkish forces in Adrianople and Thrace. Turkey was doing so poorly that an armistice was agreed upon in late 1912. However, a Turkish group called the Young Turks staged a coup, and thus talks of peace ceased and the war continued. Turkey again was defeated and the war officially ended on May 30th, 1913 with a treaty. Turkey gave up Albania and Macedonia. Many wanted Albania to become independent, and Macedonia was split among the Balkan League.[i]

The division of Macedonia was debated among many. Serbia, Greece, and Romania argued with Bulgaria over the division of the land. Greece and Serbia formed an alliance against Bulgaria, and the Second Balkan War began on the night of June 29/30, 1913, when Bulgaria attacked Greek and Serbian forces in Macedonia. The Bulgarians were defeated, and a peace treaty was signed on August 10th, 1913. Greece and Serbia divided up most of Macedonia between themselves, while Bulgaria received only a small portion of the land. Albania an independent state. Bulgaria was frustrated and looked for Austrian support, while Serbia, which was forced to give up land because of Austria, became hostile towards Austria.[ii]

It can be argued that the Balkan Wars were one of many factors that led to World War I. Russia supported Serbia and Slav nationalism, while Austria worried about this, thinking that the nationalism could be a threat to Austria's empire. Both Austria and Russia wanted to exert their own influence in the Balkans, and this rivalry led to poor relations between the two countries. After the Balkan Wars, Serbia's size was doubled, and while Russia was happy, Austria was even more worried about Serbia weakening its empire. Austria wanted to wage a preventative war against Serbia to prevent it from growing too powerful, and they waited for an excuse to wage this war. When Franz Ferdinand was assassinated, the Austrians saw this as an excellent opportunity to wage the war against Serbia. Austria attacked Serbia, but Russia came to Serbia's aid, and more and more countries got involved. This was the start of World War I.[iii]

World War I was the eventual outcome of several different conflicts taking place in Europe. Germany had become very powerful and was trying to keep themselves in favor with the rest of Europe, therefore gaining Russia and Austria as allies in order to isolate France. This triple alliance then fell apart as Russia turned against Germany and allied with France. In addition, the colonial empires that various countries in Europe had created tension on the seas and abroad.

Although on the outskirts of the war such as in Africa, Palestine, and Mesopotamia fighting was mobile, the bulk of the war was fought mainly through trench warfare in which soldiers were required to dig pathways into the ground and spend long periods of time there. The deal totals were devastating, the technology had advanced yet fighting tactics had not, therefore causing mass destruction and death which forced soldiers to dig trenches to survive. It then became a war of attrition, with each side trying to outlast the other.

Germany was eventually forced to give up territory they had earned through the war. Several different treaties were made up in order to lay out the terms o Germany’s defeat. The balance of power was returned to normal in Europe as the Germans were put in a position which they couldn’t come back from. There were many problems though with the peace settlement, and the terms set for Germany though were thought to be extremely harsh, and many make the argument that it paved the way for future conflict to come. True resolution didn’t come until much later. 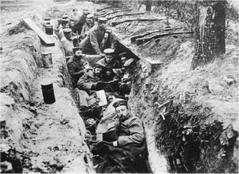 The trenches of World War I, a popular method of warfare during the first World War.

Community content is available under CC-BY-SA unless otherwise noted.
Advertisement